Posted by mareadyphotography in documentary on May 8, 2010

i shot a promo for colin kane’s comedy show at Comix called “unzipped” the other day.  this wasn’t the shot he picked, but it was my favorite.  colin’s a pretty mellow guy on stage, but it’s like this picture is showing the beast inside that fuels his brutal humor.  maybe that’s why i like it so much.  andrew schulz and josh accardo are his guest comedians this time around and i pretty much love their faces in this picture.  kinda priceless.  tickets are selling for the may 24th show now, so buy your tickets HERE. 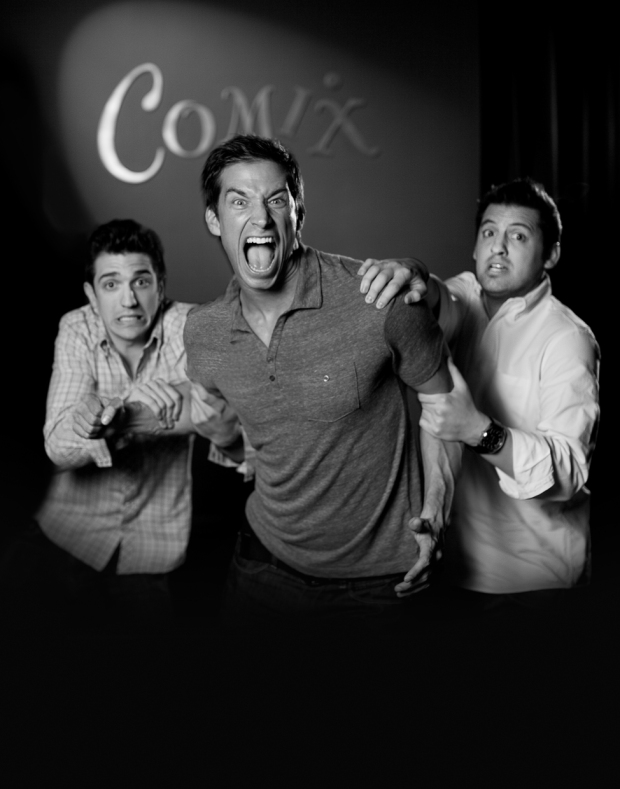 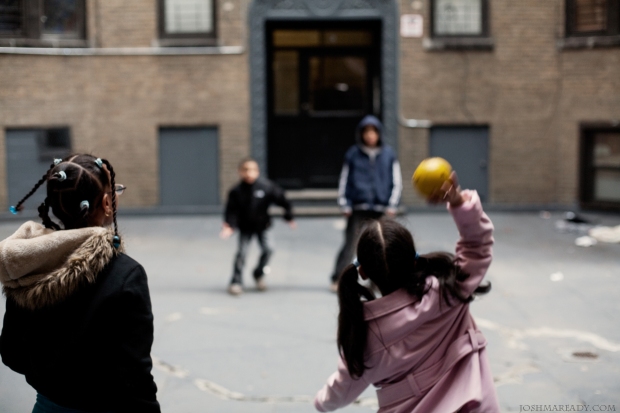 Posted by mareadyphotography in documentary on March 15, 2010

i like to imagine the weather reporter talking about the size of a storm by the amount of crappy umbrellas that will be littering the streets the day after.  they’d be like, “well john, you can expect tomorrow’s storm to bring a minimum of 5-6 UPB’s (umbrellas per block – you know how T.V. people like to “abbreve” things) then the following day will calm down to about 2-3 UPB…”  last night we had a pretty gnarly storm, so this morning i walked down 9 blocks of broadway (almost a half mile) and back to document the carnage.  during that 9 block round trip i counted 86 umbrellas.  so that makes last nights squall a 9.5 UPB storm. 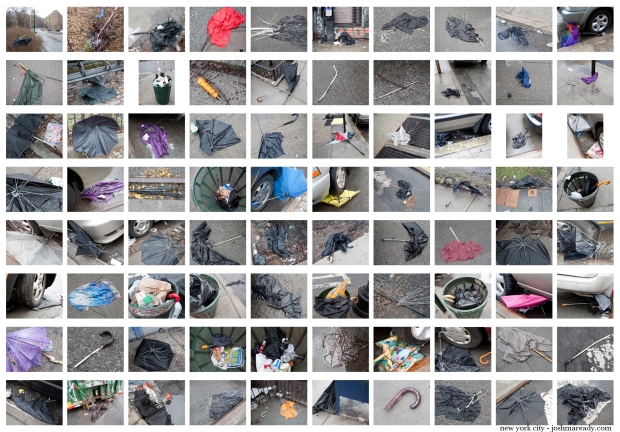 eddie spaghetti from the supersuckers

Posted by mareadyphotography in documentary, music on November 17, 2009

had a chance to hang with eddie spaghetti from the supersuckers for a minute and shoot one of their shows.   lots of energy.  they were good – in fact, according to them, they’re the “greatest rock n’ roll band in the world.”

and their wikipedia HERE 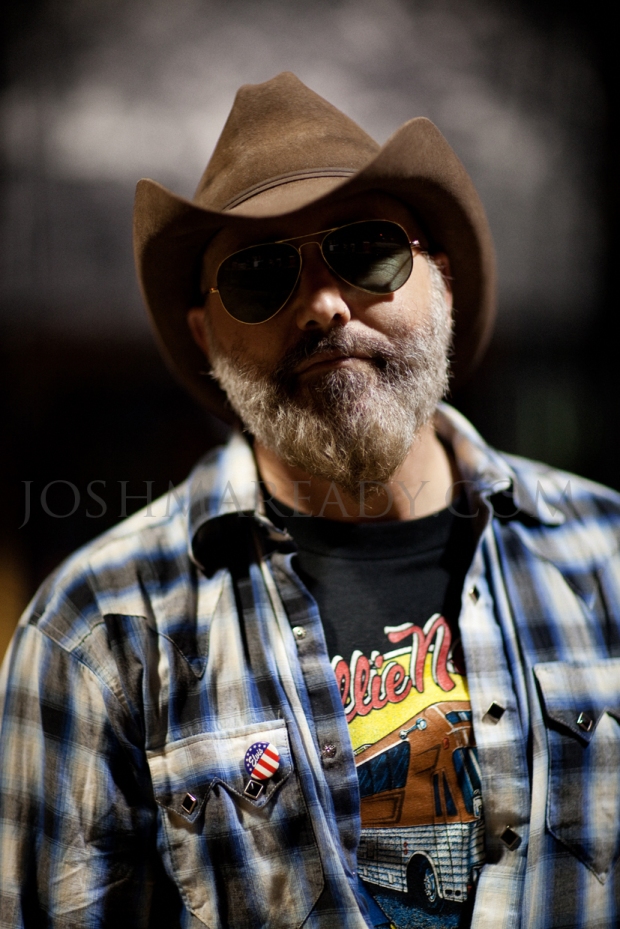 lightning from my hotel room

Posted by mareadyphotography in documentary on September 4, 2009

i can’t say, “light-NING.”  i grew up in the south, man.  so if i ever say the “ing” part of a word i feel like i’m betraying my heritage.  it’s always “lightin.”  or “fishin” or “weddin.”  that’s just the way it is.  i mean, sometimes like if i’m in the phone with a customer support lady from india i have to say the “ing” cause she’ll have no idea what in the world i’m saying.  i mean – sayin.

miami has had some ca-raaazy lightnin this week.  this is from my room at the eden roc hotel. 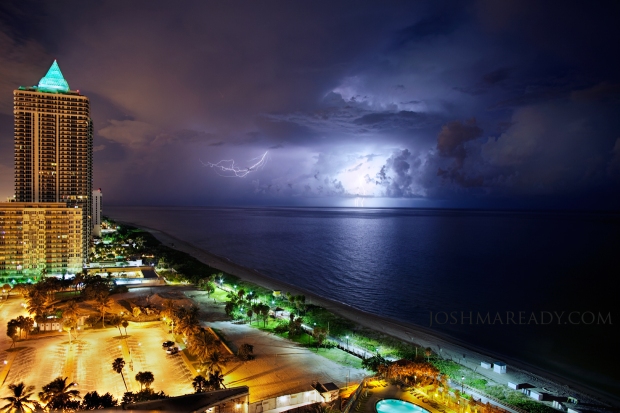 Posted by mareadyphotography in documentary on June 16, 2009

more shots of my hood 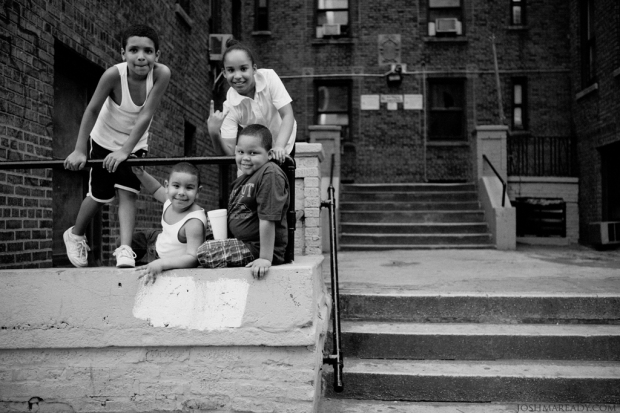 straight chillin on the stoop

there were about 30 people playing basketball on the street to the left of these guys that i wanted to shoot, but one guy got nervous and started saying i was a cop so everybody got sketched. these dudes were cool, though. i actually have 5×7 prints of this picture in my bag ready to give to them when i see em next.

the moms make the kids sit there and listen.

i friggin LOVE this.

sidewalk preaching happens a lot in the summer.

it was hot that day

this guy saw me taking a photo of this lady and started hamming it up.

this trannie was with the telemundo crew. the kids had no idea what to think.

painting toe nails on the sidewalk

this got painted over. kinda sad.

straight chillin on the stoop

on holidays, there are grills as far as the eye can see

this guy is super nice

girls hang out as the adults play quarters

playing soccer in the middle of people next to the sidewalk sale. there’s something awesome about this scene.

heated game of pokemon or yu-gi-oh or somethin

they were just chillin on the mailbox. they saw my camera and jumped down to pose and i was like, no no no! hop back up!

this girl was crying until i came up with my camera

Posted by mareadyphotography in documentary on June 15, 2009

over the last couple of years i’ve been collecting cool pictures of inwood.  there’s so much life here and so much… idunno, man.. you just have to be here to feel what i’m talking about.  it’s loud, it’s social, it’s dirty and it’s beautiful.  kids play in the streets till the wee hours of the mornin while the adults play dominos or chill around the stoop or on lawn chairs or couches they drag into the street.  instead of sitting in front of a tv all night like an idiot, the people in my hood hang out and actually communicate with each other.  it’s hard for me to take pictures around here because people usually think i’m a cop or for some reason they don’t want their faces in front of a camera.  but people are usually cool with me shooting their kids, so i start with the kids and sometimes they’ll warm up to me.  many more to come… 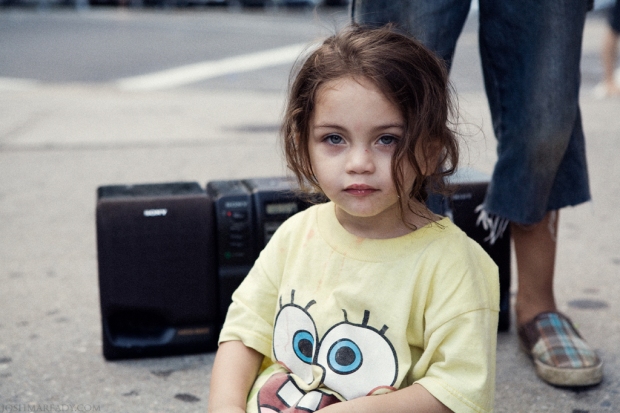 walked up on a friendly wrestling match at the park. the guy on the bottom just wouldn’t give up.

i can’t even take it how cute these kids are

i love all these colors

she was kinda shy at first

this is another favorite

chillin at the corner store

cute as a button

she was hilarious. she was laughing because i was throwing a balled up piece of tin foil up in the air and making it land near her feet.

these kids were fun to shoot

i was in the elevator with this girl and her mom and she saw my camera and started posing, so after we got out i started snapping shots.

this is probably one of my favorite shots. i love everything about it.

Posted by mareadyphotography in documentary on June 13, 2009

i was staying at the fess parker’s doubletree in santa barbara when the jesusita fires started burning – these shots are from my hotel room balcony on the second floor.  one night we were eating outside and the wind changed and started blowing in ashes.  i said that it was weird to think that i might be inhaling some kids teddy bear – that’s pretty messed up, but that’s some hard reality right there.  all the vacant rooms at the hotel were slammed full with evacuees – some were sleeping in their cars that were packed full with whatever they could cram in before they had to evacuate.  in total around 80 homes were destroyed and another 20 or so were damaged.  i had a house burn down one time and that crap is no good.  but the free cookies they give you at the doubletree are fan-frickin-tastic. 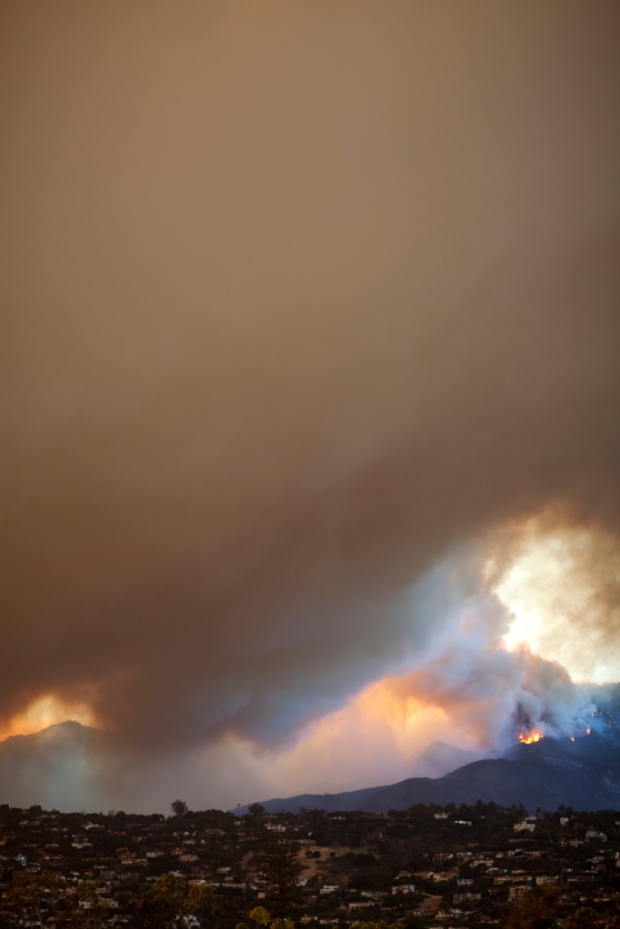 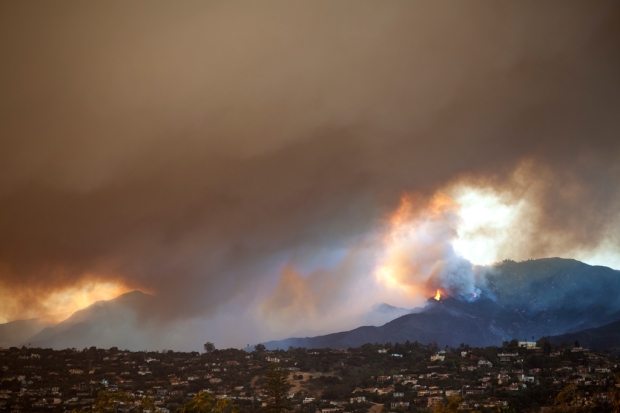 Posted by mareadyphotography in documentary on March 8, 2009 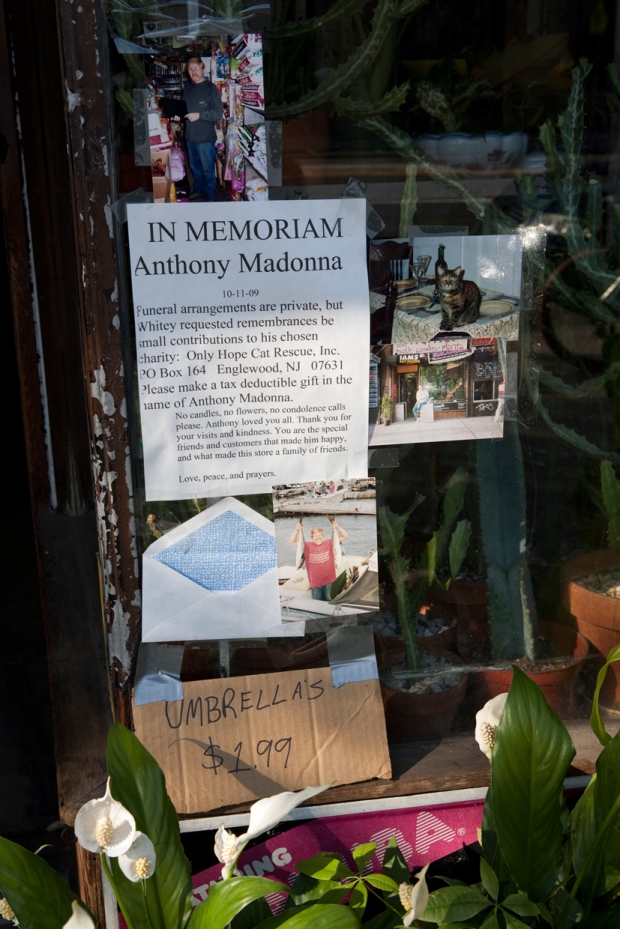 this summer i was lookin all over for venus flytraps.  i made calls to plant stores, went to home depot and some other places, but nobody had any left.  so one day i was walking down broadway past dyckman st. (200th st) in manhattan and i saw an old, small plant/pet supply store called Pic-A-Pet.  see, i’m a sucker for small, privately owned stores; the older the better.   this store had weathered a few storms in it’s day and the guy sitting down just inside the door seemed to be in about the same condition.  when i asked him if he had any venus flytraps,  he said with a smile, “yeah, we got em for 9 bucks.”  so i picked up two plants.  i asked him if i could have a receipt and when we walked near the register that looked like it hadn’t been used since before i was born he looked around for his receipt book.  it was yellowed with age and when he handed it to me, i looked it over and it was receipt #42 from the 70’s.  i said, “don’t write many receipts, huh?”  and he started laughing.  his name was Mr. Tony Madonna – a life-long new yorker; a real genuine kind of guy with a heart of gold.  it’s funny how once i stopped in to ask about flytraps and  now i stop in whenever i’m near just to say howdy to my new friend.  his wrinkled face and callused hands have a few stories to tell and if you stop in, you just might get to hear a couple. 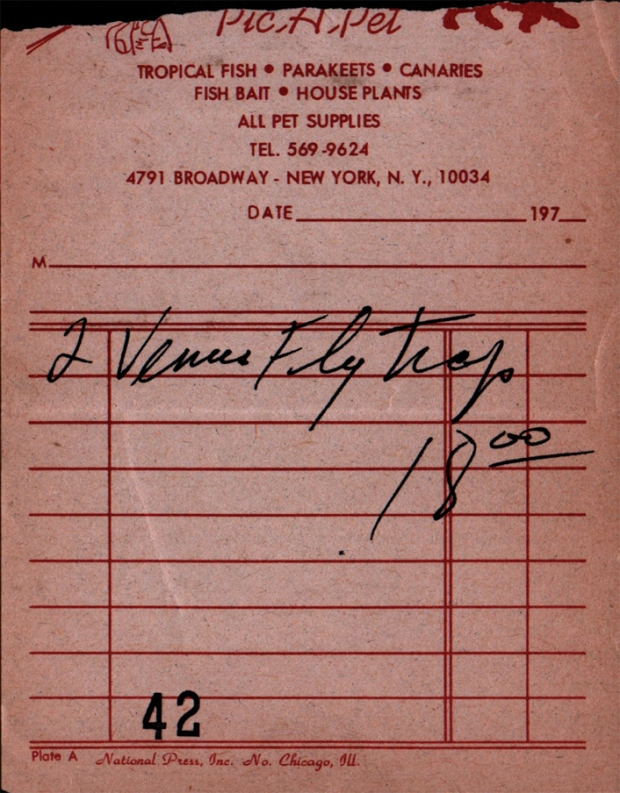 look at the date. how cool is that?! 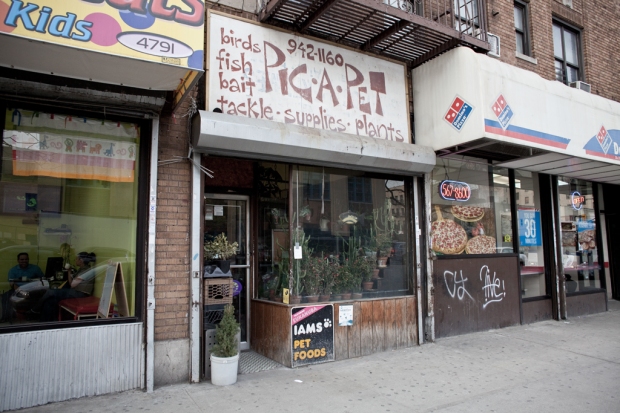 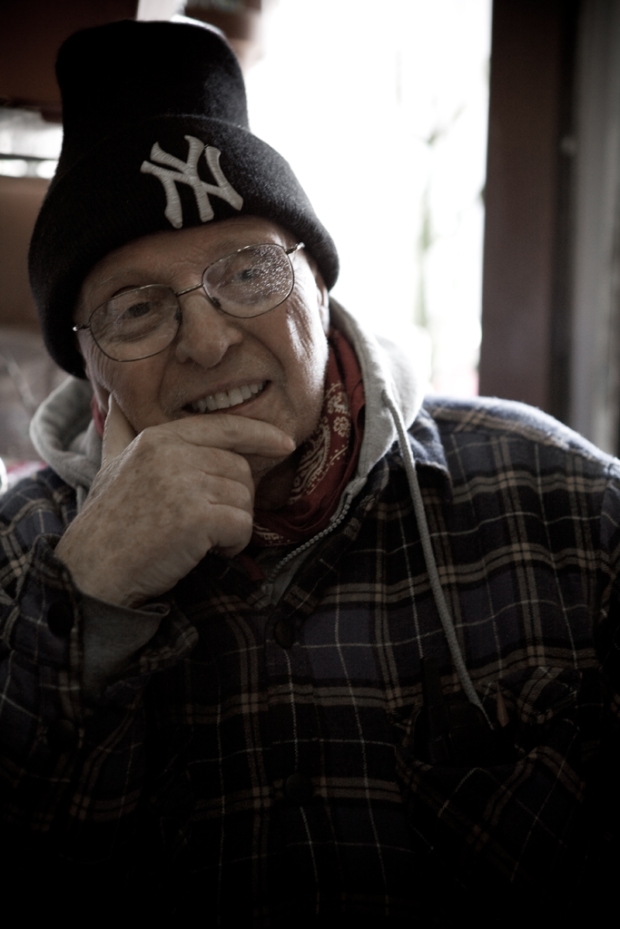 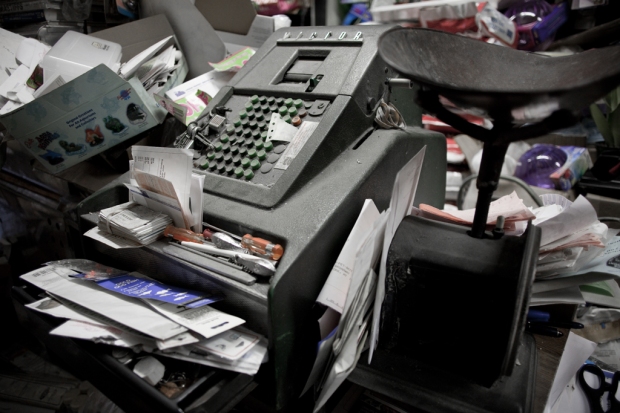